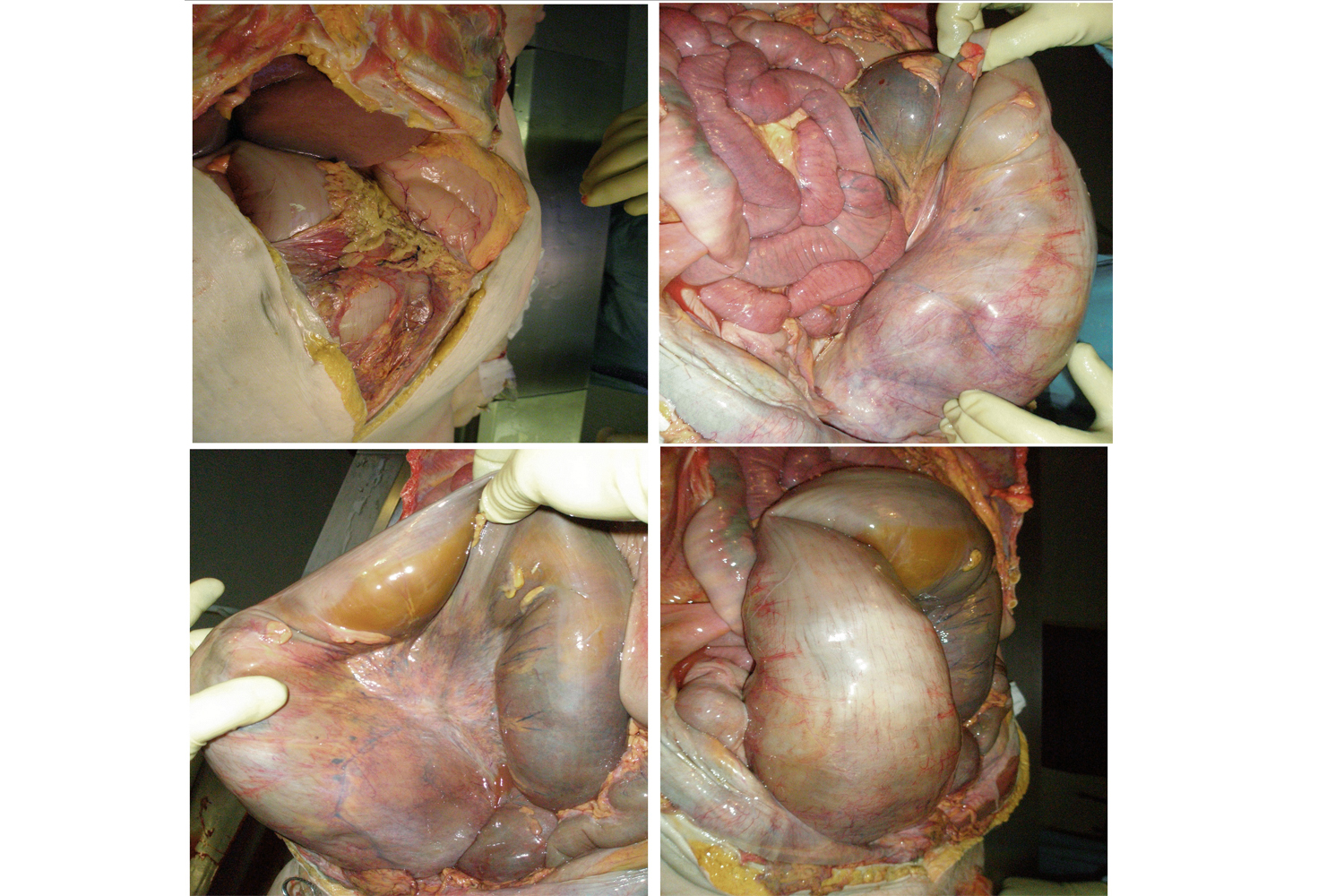 A 67-year-old woman was taken to hospital by ambulance after collapsing at home. She had complained of general ill-health for a number of weeks. Large bowel obstruction was diagnosed. In view of the fact that she was febrile and hypotensive, intravenous fluid was commenced and antibiotics administered. She failed to respond and died later that day. Autopsy showed the rectum, sigmoid and the lower part of the descending colon to be enormously distended with an average external diameter of 300mm (Figure 1: Enormously distended rectum, sigmoid and descending colon, protruding out of the pelvis into the peritoneal cavity and compressing loops of small bowel). The distended large bowel contained impacted hard faecal material. The mucosa showed extensive ulceration. The bowel was also perforated at the recto sigmoid junction. Secondary pelvic peritonitis was noted. Death was attributed to septic shock, secondary to peritonitis following bowel perforation. Discussion Faecal impaction is a consequence of constipation. The most important risk factors are inadequate dietary fibre and low level of hydration. Lack of mobility because of aging, stroke or spinal cord injury may also lead to faecal impaction. This is due to colonic mass movement retardation and muscle weakness in the abdominal and the pelvis. Medications such as opiate analgesics, anticholinergic agents, calcium channel blockers, antacids, and iron preparations can also lead to gastrointestinal motility retardation and faecal impaction. Paradoxically, laxative-dependent patients can be at risk of developing faecal impaction because such patients often become unable to produce a normal response to colonic distention [1,2]. Faecal impaction is a relatively common gastrointestinal disorder often seen in frail elderly patients. It is found in almost 50% of patients in geriatric wards and nursing homes. It can dramatically impair quality of life and cause significant morbidity but is seldom fatal [3]. Typical symptoms of faecal impaction are similar to those of intestinal obstruction from other causes. Symptoms often include abdominal pain and dissention, nausea, vomiting, and anorexia. The disease is often recurrent with up to 50% of patients with faecal impaction have a history of prior impactions. Complications of faecal impaction include stercoral ulceration, fistula formation, megacolon, and colonic perforation. Some patients may present with paradoxical diarrhoea and faecal incontinence [1,4]. Examination of the abdomen may reveal a malleable, tubular structure in the recto sigmoid area. Signs of perforation (tenderness or peritoneal signs) are generally absent. Although most impactions occur in the rectal vault, the absence of palpable stool on digital rectal examination does not rule out faecal impaction. Plain abdominal films to search for intraluminal faeces or signs of obstruction are indicated [5]. Treatment is aimed at relieving the major complaint and correcting the underlying pathophysiology to prevent recurrences. Faecal impaction in the rectum often requires digital fragmentation and mechanical removal [1,2]. Oral medications with polyethylene glycol solutions containing electrolytes may be used to soften or wash out proximal stool.3 The presence of bowel obstruction as evidenced by dilated small bowel or colon with air-fluid levels contraindicates attempts at proximal softening or washout using oral solutions [6]. When the impaction has been adequately treated, possible aetiologies are explored. A total colonic evaluation should be performed to reveal anatomic abnormalities. Endocrine and metabolic screening is also indicated [6]. In the absence of an anatomic abnormality, a bulking agent or an osmotic agent is administered to produce soft regular bowel movements. Other risk factors such as depression, immobility, lack of exercise, and inadequate access to toilet facilities should also be corrected [2].