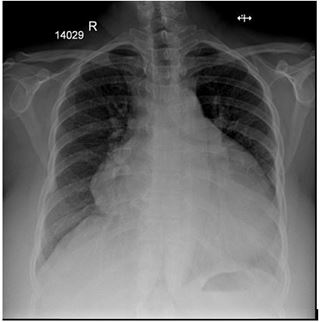 Striae distensae is relatively common dermatologic condition encountered in practice. It occurs on the abdomen and the breasts of pregnant
women, on the shoulders of body-builders, in adolescents undergoing their growth spurt, and in individuals who are overweight. It is also seen
in case of massive ascites or abdominal mass leading to continuous stretching and breaking of dermis of skin. A 48-year-old female patient
with type 2 diabetes mellitus since 12 years came to us with features of congestive heart failure in form of pedal edema, mild to moderate ascites
and raised JVP. Liver could not be palpated due to obesity and skin edema. Patient had two live kids and had history of three spontaneous
abortions. On inspection of abdomen, multiple vertical and oblique striae were seen over the anterior abdominal wall. Striae were slightly
pale in colour as compared to nearby normal skin. Few parts of striae were raised and mulberry like in appearance. They were boggy and
soft on touch. Patient also had facial puffiness characteristic of congestive heart failure. X-Ray chest PA view of the patient revealed huge
cardiomegaly and echocardiography showed global left ventricular hypokinesia with ejection fraction of 20%. Pulmonary artery pressure was
also found to be greatly raised.

It seems that patient developed stretch marks over anterior abdominal wall during multiple gestations she had gone through. Now as she had
developed features of congestion and that has led to these peculiar changes to already present striae. It is proposed that oedematous and fluid
filled striae especially when present in abdominal wall and in multiparous females can be inferred as marker of fluid overload state which may
be due to congestive heart failure, hypoalbuminemia or nephropathy. We wish this to be called as Dwivedi-Malik sign. This can also be used
a guide for optimal and judicious diuretic therapy (Figures 1 and 2).