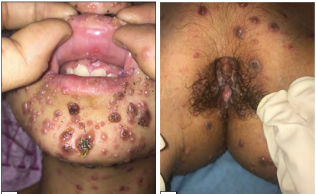 11-year-old girl well vaccinated, with the notion of viral contagion in two cousins and a little sister suffering from chickenpox. She had flu-like symptoms 6 days before admission, abdominal pain and fever at 39.5°C before the onset of vesicular lesions, the clear contents of which spread throughout the body. Clinically, several vesicles and bubbles all over the body, including the mucous membranes with umbilicated vesicles in certain places. The presence of lesions of different ages has been noted. On the balance sheet, lymphopenia at 1170/mm3, thrombocytopenia at 42000/mm3 and TP at 76%. A chest x-ray shows the presence of bilateral and diffuse alveolo-interstitial opacities of the two pulmonary fields. The evolution was favorable after treatment with antivirals.

Malignant chickenpox is defined by a contagious febrile rash caused by the shinglespox virus which can involve several potentially fatal visceral attacks. Varicella pneumonia can occur even in the absence of respiratory signs in healthy children, it is the most common complication worrying, rare but severe. This should be taken into account if the persistence of fever after the eruption of the initial lesions. In front of any malignant chickenpox, pulmonary involvement should be sought [Figure 1-3].