Nocardia Brain Abscess in a Patient of Lung Cancer 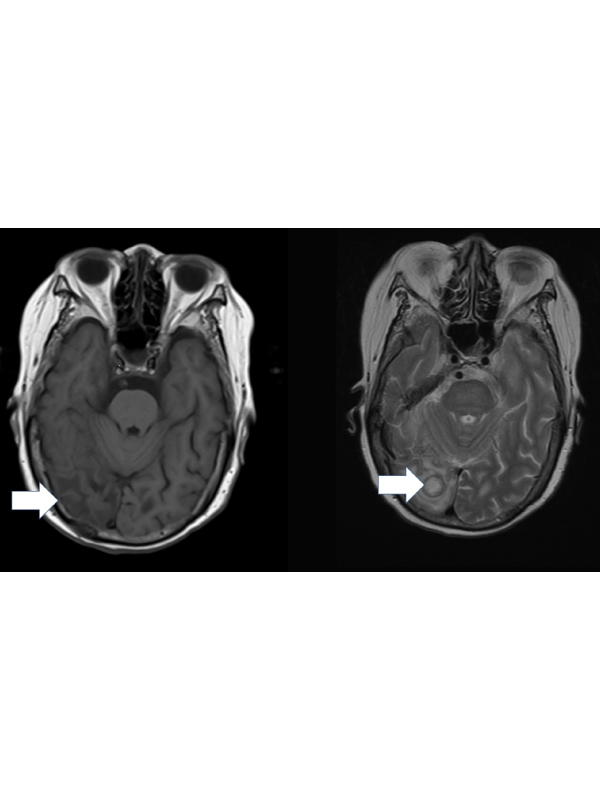 Nocardia Brain Abscess in a Patient of Lung Cancer

Abstract: Nocardia infection is reported to increase in numbers due to the increment of immunocompromised patients. The insidious onset of Nocardia infection and the complexity of clinical presentation in Central Nervous System (CNS) often will be a challenge to the clinicians. The traditional drug of choice for the Nocardia infection is sulfamethoxazole/trimethoprim. However, as the resistance to the drug increases, other antibiotics should be considered to render alternatives. Linezolid could be the one of the options. We report a case of brain abscess of Nocardia asteroids in a 71-year-old woman of lung cancer.

Clinical Presentation; A 71-year-old woman of lung cancer, adenocarcinoma, left lower lobe, T3NxM1b, with lung to lung, liver, and brain metastasis had began to receive oral target therapy with Irresa and the whole brain radiotherapy (WBRT) was recommended. Chest X-rayrevealed shrinkage of the tumor dramatically after Irresa. Agitation and inappropriate behavior seized her, which had been attributed to brain metastasis and complication of WBRT. However, vague opacity of both lung fields increased and antibiotics had been used, but her condition deteriorated to respiratory failure.

Endotracheal intubation and mechanical ventilation were used, and then she was transferred to respiratory intensive care unit. Magnetic resonance imaging of brain showed one brain abscess with diameter of 11 mm over the right occipital area (Figure 1). Careful neurologic examination was done, but it revealed neither defect of visual fields nor deficit of motor function. Empirical antibiotics were given for 2 weeks. Computed tomography of brain revealed the increasing abscess in diameter to 16 mm. Biological examination of the sampled fluid through the craniotomy revealed Nocardia asteroids. Intravenous (IV) sulfamethoxazole/trimethoprim was given, but low grade fever persisted. Meanwhile, IV linezolid was introduced to cover Nocardia infection of the brain for 3 weeks and she became clear gradually.

Oral linezolid was used for 10 weeks. Nocardia is the soil-borne aerobic bacteria of the order actinomycetales, a gram-positive numerous non-motile filaments and partially acid-fast, mainly occurring in the lungs, brain or skin. It is an opportunistic pathogen usually through inhalation or direct cutaneous inoculation, so primary infection is pulmonary or cutaneous and brain abscess is the characteristic lesion of CNS infection through hematogenous spread [1]. The incidence of Nocardia brain abscess is only 2%. The mortality of Nocardia brain abscess is 20-55% in immunocompromised and immunocompetent patients, respectively [2].

It is difficulty and delayed in diagnosis and management because of paucity of clinical and laboratory signs of infection and insidious manifestations [3]. Nocardiosis is increasingly being diagnosed in the recent years due to increasing number of immunocompromised hosts and improvement of modality in the detection of Nocardia species in clinical laboratories. The first-line therapy of Nocardia infection is sulphonamides/trimethoprim and linezolid is an alternative drug if allergy or resistance [4].