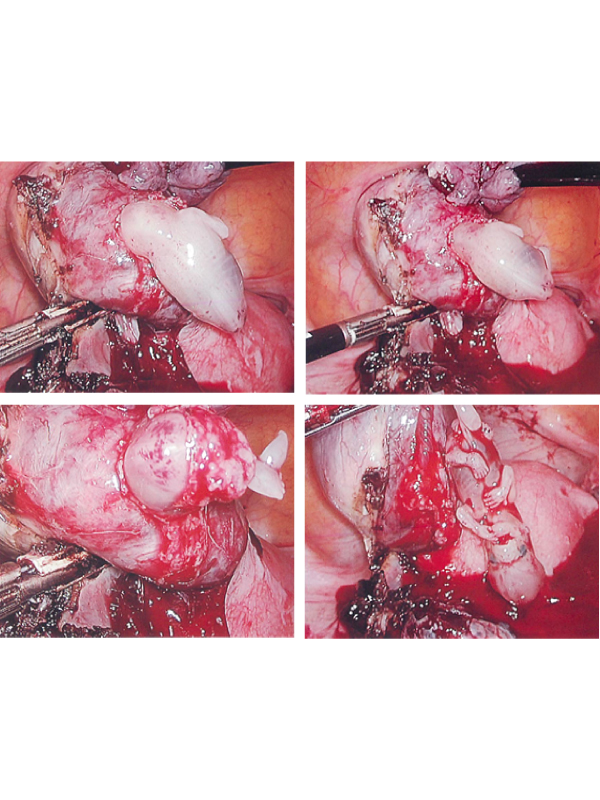 A 25-year-old nulligravid woman presented to the emergency department complaining of worsening abdominal pain. She had a history of chlamydia that was diagnosed and treated 5 years prior. Her serum human chorionic gonadotropin was 67,000 mIU/ ml. On transvaginal ultrasound, the uterus appeared empty but a gestational sac with fetal pole was identified in the left adnexa. Measurements corresponded to approximately 10 weeks gestational age and a fetal heart rate of 188 beats per minute was noted. Moderate free fluid was visualized in the pelvis. The patient was taken to the operating room for emergency laparoscopy and a large volume of hemoperitoneum was encountered with active bleeding from the significantly dilated left fallopian tube. During the surgery, the fetal feet began emerging from the site of rupture (Panel A), followed shortly thereafter by the torso (Panel B) and head (Panel C). After expulsion of the fetus (Panel D), the umbilical cord remained attached to the site of placental implantation. The conceptus was removed from the abdomen and a salpingectomy was performed without complication. Tubal ectopic pregnancies are not an uncommon finding for gynecologists but it is rare to witness a pregnancy being actively expelled from the site of tubal rupture.