Treatment of Peri-implantitis with Implantoplasty and Diode Laser 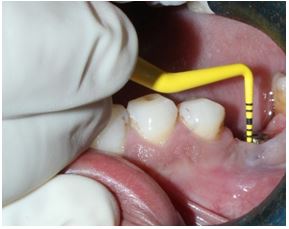 Treatment of Peri-implantitis with Implantoplasty and Diode Laser

Dental implant surgery has developed to a widely used procedure for dental rehabilitation and is a secure and predictable procedure. But, some local and systemic risk factors can result in higher failure rates and affect implant survival. Peri-implant disease, namely peri-implantitis, has been extensively studied in present era as a major cause of implant failure. There are various treatment modalities to treat peri-implantitis, which give satisfactory results and improve survival rate of implant. Though it is difficult to determine what approach will improve implant survival, present case report is an attampt to treat peri-implantitis with implantoplasty and diode laser followed by regenerative periodontal therapy.

Nevertheless, despite the high success and survival rates of dental implants, there are several risk factors and complications that could lead to their ultimate failure. Peri-implantitis is a progressive and irreversible disease of implant-surrounding hard and soft tissues and is accompanied with bone resorption, decreased osseointegration, increased pocket formation and purulence. Frequency of peri-implantitis has been reported in the range of 1–19%.

When left untreated, peri-implantitis may cause progressive tissue destruction, bone loss, esthetic complications and, eventually, implant loss. Based on numerous clinical trials and systematic reviews, several approaches for implant decontamination are available. In context with this non-surgical mechanical debridement, surgical debridement, disinfection with chemotherapeutic agents, smoothening of implant surface, laser therapy along with regenerative periodontal therapy should be noted. Mechanical debridement can be done with carbon, plastic or titanium currets, ultrasonic scaling or powder air abrasion.

When a titanium implant surface has been exposed to the oral cavity and contaminated with bacteria, implantoplasty to completely flatten/smooth the exposed part of the implant using rotary instruments may be indicated. Initially recommended by Lang et al. and reported by Suh et al., this technique aims to reduce the roughness of the titanium surface to decrease plaque adherence since it has been demonstrated that rough surfaces accumulate more plaque than smooth or moderately rough surfaces. Since implant decontamination is the key aspect to resolution of peri-implantitis, different mechanical and chemical methods have been tested in that respect. Recently, a noticeable tendency has urged scientists toward application of laser in order to decontaminate periimplant inflamed area. In vitro models have proven the efficacy of Er:YAG(Erbium-Doped Yttrium Aluminum Garnet), CO2 (Carbon Dioxide Laser) and Diode lasers in high or even complete elimination of bacteria loaded titanium disks. Diode lasers, in particular, have been shown to have potent bactericidal and photobiomodulatory effects promoting wound healing and tissue regeneration.

Current evidence suggests that peri-implantitis does not respond to traditional nonsurgical therapy. In addition, surgical therapy has been demonstrated to result in significantly reduced probing depth and gains in clinical attachment levels around affected implants. The aim of the present case report was to gain the predictable results by detoxification of the implant body surfaces in case with peri-implantitis.

Implant prosthesis was repalced with healing abutment. After achieving adequate local anesthesia (1:100,000 epinephrine), full thickness mucoperiosteal flap was reflected following cevicular incisions in adjacent interdental papillary region and the crestal incisions around implant. Then tissue debridement was done with metal currets (Hu Friedy). Implantoplasty procedure was carried out with diamond grit polishing bur. Peri-implant bony defect was thoroughly washed with normal saline. Further tissue laden with metal particles was cleaned with plastic curetts (Implacare, Hu Friedy). 808 ± 5 nm diode laser (DenMat Sapphire® Portable Diode laser) aiming beam was moved in an apico-coronal and mesio-distal direction for 10 sec at each site of inflamed peri-implant bony crater shaped defect (mesio-buccal, buccal, disto-buccal and lingual) to implant. It was used at a power of 0.1 W, non-contact in a continuous wave (cw) mode on each site, for a total time of 30 sec. After pre suturing bonegraft (Perioglass®) placement was done. Sutures were taken followed by periodontal dressing. Post-operative antibiotics, analgesics and mouth rinse were priscribed. Patient was called for follow up and suture removal after 10 days.

After 3 months during re-evalution, BOP was absent and peri-implant probing depths were measured 1 mm mesiobuccal, 1 mm distobuccal and 2 mm on lingual aspect (Figures 4-12).

Human studies have shown that combining implant surface cleaning with mechanical methods like curettes and saline soaked cotton pellets contributes to obtaining clinically stable results up to 24 months. An in vitro study using a surface profilometer showed that metal curettes reduce the roughness of rough surfaced implants and decrease the attachment of Streptococcus sanguini which is an important early colonizer in the oral cavity. Metallic curettes after 20 seconds of use can remove superficial material from the rough surface of on average 0.83μm compared to 0.19μm removed by titanium curettes and ultrasonic tips covered with plastic inserts. In present case report metal curettes had been used in open flap debridement around implant.

The aim of implantoplasty is to produce a smooth and polished implant surface, thereby reducing the amount of dental plaque that attaches to it as well as remove the implant threads, providing a less attractive environment to bacteria. In vitro studies have shown that the use of diamond polishing devices can remove the coating of the implant surface entirely thus exposing the body of the fixture. There is no consensus about the type of bur to use for implantoplasty. An in vivo study showed that diamond grit and carborundum polishing or just the carborundum give similarly polished surfaces. The release of titanium particles from implant fixtures placed onto the peri-implant bone during preparation of the implant bed has been reported. In present case report, peri-implant region was thoroughly rinsed with saline during and after implantoplasty. To clean all the released titanium particle debris from peri-implant bone surfaces, saline soaked cotton pellets and plastic curettes were used to prevent scratching over polished implant surface. Previous studies have shown that the released titanium particle debris is mainly concentrated at the crestal parts of the bone in contrast to apical areas. Debris amounts reaching 0.2–3.0 mg may induce peri-implant osteolysis, which manifests as early marginal bone loss around the implant.

Diode lasers have a bactericidal effect due to a localized increase in temperature, stimulates fibroblasts and osteoblasts, which, in turn, cause increased production of RNA messengers, leading to significant collagen production during periodontal tissue healing.

Shortly after the laser was invented in 1960, Endre Mester noticed photobiomodulatory effect of laser over mice. Low Level Laser Therapy (LLLT) with diode laser has an effect on fibroblasts by promoting proliferation and increasing cell numbers, secretion of growth factors, and differentiation of fibroblasts into myofibroblasts. Various in vitro studies have shown that laser irradiation increases bFGF release from gingival fibroblasts. This collectively results in improved wound contraction and accelerated wound healing. However, a precisely determined dose has not been proved for each indication. Biostimulation has been reported in the literature with doses between 0.001 J/cm 2 and 10 J/cm 2 as a therapeutic window. Even though applied dose is in the therapeutic window range, it might be too low or too high for the desired effect. Mester et al. suggested in 1971 that doses of ≈1–2 J/cm2 are necessary to see an effect on wound healing. One randomized split mouth clinical trial shows the additional photobiomodulatory effect of 810 nm diode laser over modified widman flap surgery in cases with chronic periodontitis, bone and root surfaces were irradiated with at 0.1 W in continuous mode.

It can be stated with some assurance that physical alteration (smoothing) of the implant surface using metallic instruments has been demonstrated to slow or halt the progression of bone loss in humans as well as animals. While this application is certainly useful, the drawbacks include soft tissue retraction and esthetic compromises. At present a combination of physical and chemical approaches possibly with appropriate laser therapy may prove to provide more predictable results. From this case report it can be argued that further investigation of optimal ways to treat implants affected by peri-implantitis as well as the prevention of these problems is warranted.